A couple of years ago when the Tucson Museum of art had a major exhibition of her work, I was lucky enough to meet Rose Cabat. I’ve always thought it was so interesting that this famous 4th. Avenue ceramicist was so well known by collectors all over the world, but here in Tucson I meet people all the time who do not know of her, or her work.

Rose working in her studio

Rose Cabat (June 27, 1914 – January 25, 2015) was an American studio ceramicist who was best known for her innovative glazes on small porcelain pots that she called “feelies.” These are often in the shape of onions and figs.   Rose continued making pottery even at the age of 100.  She was the oldest living, actively working, ceramicist in America. She lived in Tucson.

After WWII Rose made crafty ceramics such as wind bells, animal figurines, etc. to help support the family. Meanwhile, her husband Erni worked in Tucson as a graphic artist and in advertising. They became friends with local artists, and helped to start the Art Center, the forerunner of the Tucson Museum of Art. 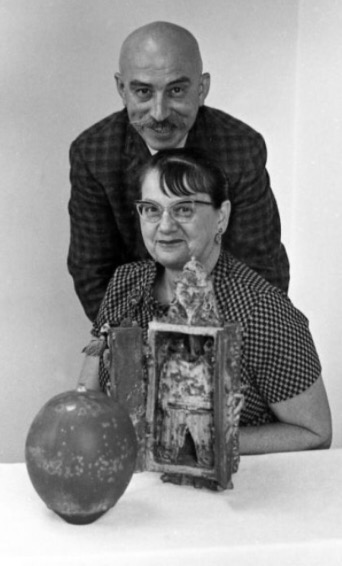 In 1956, Rose and Erni took a pottery glazing class at the University of Hawaii. Thus began the development of glaze formulas which were later applied to those “feelie” forms that become Rose Cabat’s most famous works. In about 1960, she hit upon the basic form of the vessel which would become the foundation of the “feelies.” She created a pot with a delicate closed neck, which could not even hold a single slender flower stem. She said,

“A vase can hold weeds or flowers, but can’t it just be a spot of beauty?”

By 1966, Rose Cabat was beginning to be recognized as a craft artist, with an exhibition at the Los Angeles County Museum of Art. The Tucson Art Museum loaned one of Rose Cabat’s blue-green feelies to the mansion of the Vice President, Walter Mondale, to be displayed in his living room along with other works of art.

Now about those “feelies.” Yes, they do have a different “feel” than any other pottery. They have been described as sensual with an unforgettable texture. The silky satiny glaze has even been called almost spiritual. If you ever get the opportunity to hold one you will see what I mean.

As the Antiques Roadshow appraiser, David Rago has said, “While some modern studio pottery is intellectual or even angst-ridden, the work of Rose Cabat … expresses pure joy in its design and decoration.”

I have been lucky enough to own a piece by Rose Cabat. It came from the estate of Berta Wright, another mid to late twentieth century Tucson resident who also made many contributions to the mid century modern movement. It’s also hard to find people who know who she was. Ah, Tucson. So many interesting people have called you home.